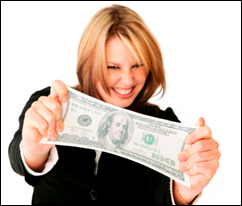 How come that companies hire recruiters to find new developer employees for them? Apparently it’s either hard to find them, or they do not want to make the effort to find them their selves. If it’s the latter, it could be because the company is really, really small and they don’t have the resources. But in all other cases, maybe developers should start wondering if they want to work for such a company.

But let’s get back to the first reason; let’s assume it’s hard to find new developers.

Simply for this reason, employers are willing to pay immense amounts of money to recruiters, sometimes tens of thousands of dollars. But when you ask them how often their developers go to conferences, most of the time the answer is that every year only a few can go to the Microsoft TechDays.

Some companies have 5 developers at work and send all of them to the Microsoft TechDays. How can a company with 100 developers employed, tell me without being ashamed that they only send 5 developers to the Microsoft TechDays. When asked, I was told that sending many developers costs a lot of money. But is it so wrong of me, to question their intention? Because if they have 20 times more developers, aren’t they making at least 20 times the money? So it’s obvious that TechDays will costs 20 times as much as well. In other words, it’s all relative and in the end, the company isn’t making more costs than the company with 5 developer employees.

Of course I understand you cannot simply send 100% of your development department to a conference, all at the same time. Your customers will probably not accept that.

Invest in your employees
But what I cannot understand is that you’re willing to pay an insane amount of money to a recruiter, but you’re not willing to invest in your employees! What about the idea to send 50% of your developers to the Microsoft TechEd Europe every other year? That way every single developer will visit TechEd every other year, but there’s always 50% of your developers working at your customers. What do you think the result will be?

I know not every developer is like me, but I’d expect every great developer lining up at your doorstep, applying for a job at your company. Especially since you’re probably the first in The Netherlands to support your employees like that. You don’t need recruiters anymore and you can invest the money saved in your own employees.

Want to know why Microsoft and Google have the best developers in the world? Because they provide their developers the best benefits that go around. Free lunch, great hardware, conferences and Google even has slides that end up in the restaurant. Today I read that every seat at the Google office is at most 150 feet of a restaurant or another place where their employees can get something to eat. Simply because that’s where the best discussions are being held and the best ideas are being produced.

Create an atmosphere people feel happy in, it’ll make them more productive
When you invest in your employees, it’s not only for them gaining knowledge. It’s also creating an atmosphere where people love to work. This will not cost you much, especially when you consider what it’ll cost to replace someone with the knowledge a developer has. Besides technical knowledge, they also have all the knowledge of the current system and especially of the business domain you’re working in. I once read that a very thorough research was done and that creative employees like developers cost around $50.000 to replace, taking everything into account. You can seriously cut down on costs by investing in your employees!

Again, try to provide a great place to work at. Provide them with great hardware, some gadgets like a Surface RT/Pro tablet, etc. Free lunch works really, really great. And provide them the chance to go to a conference at the very least every other year! Contact me if you’re willing to make me an offer! And I’m not kidding!

Additional information
For Dutch readers, here’s another post on Facebook about recruiters. If you really need to hire a recruitment agency, I have a recommendation there as well… 🙂